Last night (Mar. 11) I did something I had been putting off for a while. That “something” was the rather enjoyable task of watching a particular episode of The Simpsons.

Although I have always enjoyed The Simpsons, the truth is that these days I do not watch much television. However, I had been wanting to watch one episode in particular: “The Book Job” (S. 23 E. 6) for a while now, specifically because of Neil Gaiman.

Gaiman is one of my favorite authors (live or dead, regardless of genre [and THAT’s saying something]). I wanted to watch the episode partially to support him and his efforts beyond books, and partially to see the episode based on its own merits. (My logic followed that if he would agree to be a part of it, there must be something interesting and appealing to him – and thus to me – contained therein.)

Gaiman’s choice of affiliation did not disappoint. The episode was cleverly done, and while it was not as overtly humorous as some episodes, it contained so many clever bits for writers, aspiring writers, and fantasy geeks that I have no problem saying it has distinctly become my all-time favorite episode of The Simpsons.

Of course what makes any sort of humor funny is that it contains at least an element of truth. There were a few of those “true” moments in this show that I wanted to discuss, because a day later, I’m still thinking about them. It really is the beauty of satire.

— SPOILER ALERT —
WARNING: I am going to talk about the episode in detail now. If you haven’t yet seen it, go to iTunes and give them $3 for S. 23 E. 6 and watch. Then, you may continue reading.

The first moment that made me laugh was very beginning of the episode. When the dinosaurs roared a la Jurassic Park and the children started screaming, I thought it was absolutely brilliant. Because that’s what dinosaurs are supposed to do. But in so many mediums, they have become these vanilla figurines — no longer genuine interpretations of what they were. And of course, it’s not so difficult to extend this metaphor to writers, is it?

Then of course, there’s Lisa’s chance encounter with her favorite author. The revelation that what we’ve all suspected (the all-too-unbelievable authorial origin story is itself ficticious). That in and of itself should provide a measure of true in function to readers. After all, it seems so other-worldly that stories can just appear into a writer’s head by way of good fortune. The B.S. we are fed — about “Muses” and “ideas” and “development” seem far less logical than the explanation provided by The Simpsons: market research, writing teams, and “pill popping lit. majors”.

And there, again, I chuckled a chuckle that only a lit. major would have. What are the pills? Well, adderall, of course. And I’m not trying to say all lit. majors are addicted to adderall (who would ever spin such a devious tale?) but I am trying to most of us have “experimented.” In fact, some case studies are quite scientific in their nature. I have even heard of studies that are conducted over a period of several semesters. Those are done by lit-majors who minor in bio…

Anyway, the pressures of writing papers to deadlines, of having to read and research and write all within a small timeframe, all while trying to balance identical demands for other courses…well, they do cause some of us to be short-term “pill poppers”. And – why yes! – the moment where one writer collapses and is hosed off by a janitor as another eager writer takes her place is exactly the sort of fear we all imagine. The ghost waiting in the wing.

Because we are all constantly reminded, especially when we get into the “real world,” that there are plenty of people willing to replace us. People who can do an equal or better job and are willing to work harder to take the little bit we’ve managed to make. It’s vicious. And so, as a writer, we do tend to constantly look over our shoulders. We are ever-mindful of the moment when a slip up could cost us our precious little writer’s cubical.

Then of course, there was the classic moment when Lisa decided that she would become a writer. What ensued was perhaps the best display of what happens in the moments/minutes/hours/days/weeks before you actually find the courage (because that’s really what it is) to sit down and write (and the despair at feeling as if you’d never find an original thought to call your own).

Whether you decide you want to re-arrange your CD’s, do “research” at the book store, save up for and then buy a dedicated writing laptop (as I did), fix a non-functioning gas fire place for ambiance (as I did), have a steady and ready supply of hot chocolate (more money…#Keurig) or whatever else makes your writing enviorment ideal, there is so much that goes into the bizzare workings of our inner comfort. So much that must be just so before we can begin typing. Some people go so far as to trap themselves in isolation. Others think the Rowling-coffee shop™ route is ideal. Whatever your ticks are, though, you can be sure that we’ve all got them. 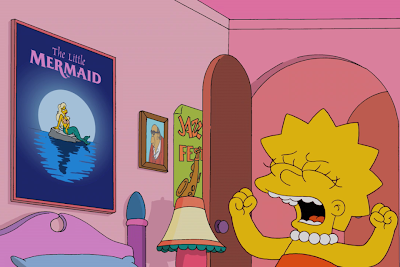 The trick that “The Book Job” is alluding to actually find a way to work. And that’s where the irony of Homer’s “Gang” come in. Each member specializes in one aspect of the story telling process and are thus able to bounce ideas off of each other. There is a monetarily motivated bottom-line to their writing, and they treat writing like a job. They work and they take a short lunch break and get back to work. In the end, together, they finish something and have mastered productivity in a way Lisa hasn’t yet begun to understand.

And that too, is truthful (at least in my brief experiences writing). Because not much comes out when you’re writing for art’s sake alone. Rather, words tend to come when you force them, and your “voice” and purity are (more than anything else) products of consistent writing. The delete button works wonders, and after several rounds of revisions, you can look at something you’re proud of. Something that you’ve finished because it’s your job as a writer to finish these sorts of things. And that’s how we get better.

Of course, in real life (as opposed to the Simpsons,) a writer must be every part of the writing team. A master of each aspect that goes into a book…it’s something Homer can’t comprehend. There’s a great moment, when When Lisa declares she’ll write her own book, and Homer says

“Wait, you’re gonna be all the guys? How would that work?”

And it’s true. Being the one who understands plot, and the one who can get the lunch, and the one who knows how to find a hook, and the one whose prose resonate with a reader all at once seems daunting. But that’s why not everyone can be a writer. Not all of us have all of what it takes. To that problem, there are only two solutions: Give up, or Get better.

And when Lisa actually realizes that she hasn’t done anything but procrastinate, and is given the opportunity to gain the fame of being a writer without actually having to do any writing, she’s in. Honor be damned- the idea of being attached to a novel is so appealing that she’s willing to go along with it.

Ultimately, when she’s pressed to come up with a story- when she’s literally pushed and put into a pressure situation, she comes up with one (her fictitious origin) immediately. It seems like the tools were there all along; she’d only ever lacked the “kick in the ass”. And I agree- that’s one of the most difficult parts of writing. We have to kick our own asses, or the stuff never gets written. Otherwise we’re not writers. We’re just ‘idle dreamers’.

There is also one final topic worth mentioning in this episode. It’s something Gaiman mentions when the crew has their work changed. 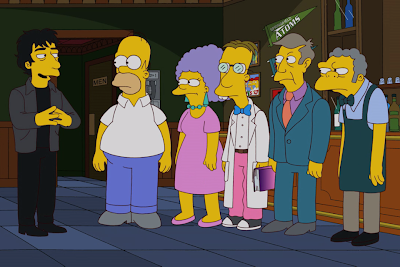 And its the experience that writer’s have to deal with- their ideas being changed to fit a reader’s likes (as per an editor who knows much more about these things than we do). Of course, some of our ideas are too valuable to us to allow change (those are the ones we fight for!), and others are small battles worth conceding in a winning war effort: a war of an acceptable and a worth-while novel.

Overall (in case you couldn’t tell) I really, really enjoyed this episode. It was full of worthwhile moments that could really be expanded upon by writers, aspiring writers, or anyone who has ever received a negative comment on a school paper. As with many “Simpsons” episodes (and satire in general), there are universal experiences to be had, and once more, The Simpsons has proved that its life lessons not only have merit, but contain really useful and timeless satirical merit.

I’m glad that Neil Gaiman chose to be a part of this episode. Because of him, I was able to experience something that was not just meaningful, but inspirational. And I’m sure that sort of impact plays a part in why we all choose to write. I know it’s a major motivation behind my words.