Anyone over the age of thirty will stop and talk to you about the impacts that technology have had on their lives in the past decade. They actually want to talk about it. Truthfully, they’re still trying to adjust.
At book store conglomerate Barnes&Noble, parents are desperately trying to reconnect their children with what they believe is the soon-to-be-forgotten value of physicality associated with learning.
However, engaging children in our “old fashioned” pastimes is not an easy task; don’t let nanny bloggers fool you. There is a larger cultural shift taking place, and children are actually running the show.
To be honest, I’m not that old. I was born as the 80’s died, and I am young enough to be confirm that I had color video games, VHS tapes, and my own computer by the time I began high school. But even for me, there was something about emerging technology that I shied away from. It wasn’t that I was afraid of or confused by tech- in fact on those points it was exactly the opposite. However, when I was a kid, I knew that the expensive machines were not for me to touch. They were expensive, and required adult supervision.
Fast forward to Christmas Season, 2011. As I observe Barnes & Noble, which encourages parents to bring young children in the afternoons for story time, I notice only about half of the expected youngers and their parents are in the audience. Such low numbers for this normally popular event seemed unwarranted, so I ventured away from the children’s section and began to look around. What I saw next did not surprise me at all. 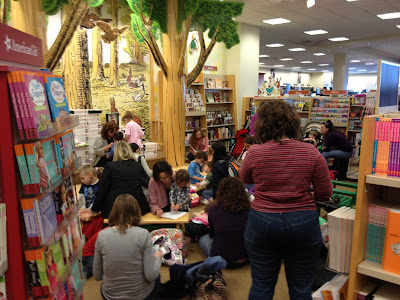 On the first floor of the store, there were several families with young children. Adults were either sitting and playing with their kids, or observing them closely. All of the children were doing the same thing. Each one held, in his or her hand, a brand new color Nook reading device.

The kids handled devices with an air of entitlement that they have earned through tried and true targeted marketing campaigns and hard earned dollars ensuring that the next generation grows up without the pleasure of page turning.
Even as I observed, another family with two children walked into the store, and the children, despite their guardian’s provest to join the reading circle, immediately found their way to the Nook display, where they sat in miniature person sized chairs in a miniature sized person’s table and played games that might have helped them to read or learn math. 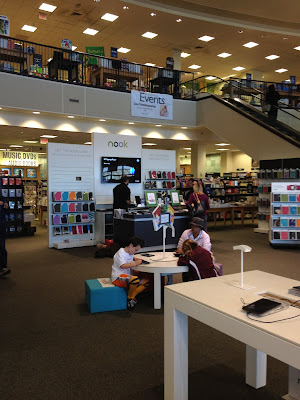 That really wasn’t the point, though. The thing that I took away from that brief exchange was that times are changing. No longer are children considered too clumsy or unpracticed to wield our most expensive toys: rather, they are being encouraged to do so by their families and advertisers. The discussion about whether or not e-readers and tablets are a good idea for children versus paper books is an entirely different issue, and deserves consideration. What we need to understand, though, is that our children are learning at a much faster pace than we did. The world is being given to them at light speed, and they barely have time to digest what they’re learning before the next new thing is put in front of them.
What should concern all parents and citizens in a country where children are being force fed so much information, however, is the qua lity of their processing skills. While it is true that today’s youth are learning faster, whether or not the quality of their knowledge is equal to ours remains to be seen.
For all of our sake’s, let’s hope so.
Tagged on: b&n, barnes&noble, books, children, culture, e-reader, nook, paradigm shift, reading, technology, writer's eye, youth