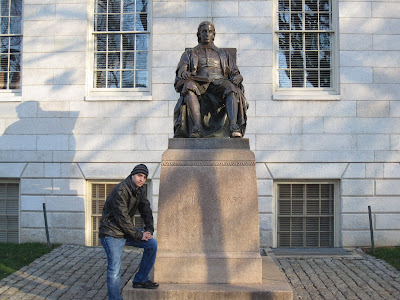 A google search lead me to this article..well- it’s a blog I guess.

I read it and (still) feel wholly left out.

My family never pressured me to go to Harvard. They never said it would make them proud. They never even mentioned it as I grew up. And it wasn’t because they doubted that I could get in.

I think it was because they know that it’s a lot of unnecessary pressure to put on a child- or an adolescent. Harvard is (after all) the top. Or, at least: it’s supposed to be.

Like a lot of people, I saw “The Social Network” a few months ago. I think that, despite what is or isn’t said about Harvard (and by extension its students, traditions, and prestige) one thing remains indisputable: it is Harvard University: Established in 1636.

There it is. Shake that. You can’t. It’s older than the country I live in. It is the oldest institution of higher learning in North America- and you don’t need a search engine to find that out.

I always wanted to go there; in fact, I still do. Perhaps it’s me wanting to realize a secret boyhood dream highlighted by Hollywood and re-enforced by my subconscious desire (Hogwarts knocks up all of England, and they have a baby school in America.) Everyone knows that Harvard is “THE” place to be. And, when you graduate, you may or may not be able to perform magic…but at least you were there. You were in.

Or maybe, it was never really a desire influenced by England or Hogwarts- After all, my Harry Potter obsession didn’t start until I was 16 (right before Half-Blood Prince…you could say I was late to to that party, [but fashionably so.]) and well, my obsession with England is still unexplained (partly because the terrain of that country still hasn’t been personally experienced/explored. Sad story.) Maybe it was when I was younger? I’m still feeling unsure-

So let’s dig deeper. Or maybe, circle back to the beginning: “Exclusivity.” That seemed to be the central thesis of “The Social Network”- it seemed to be what Harvard students themselves commended the movie on, and (more importantly) what they felt was most accurately portrayed about their school.

Yet…the university is wholly accessible. You saw a picture of me, standing next to the statue of John Harvard. Me. A student at a university founded a mere 53 years ago. But I got there. There were no Abercrombie models guarding the doors. (Although, I must admit: there were security staff present at all 3,234,905 libraries (erm…178 actually) on campus. It’s difficult to pee at Harvard without valid ID. Just saying.

There was a natural history museum – open to the public (the museum was basically an exercise in intellectual Harvard brand masturbation- but I digress) and, well…constant reminders of the impact Harvard’s alumnus have had on society. And let’s face it: one of the major brain children of the exclusive institution that is Harvard (certainly the most profitable thing to emerge from Harvard in the past decade) Facebook- has for all intents and purposes, become entirely inclusive- an interface meant for everyone. Some kind of sick melting pot where languages such as “Pirate” can be spoken, severed connections can be sewn together, and our lives can simply exist “in a cloud”- access to all.

What is most intriguing, though, is that despite Harvard’s best efforts, they cannot maintain their exclusivity. Even at Stony Brook, I have been taught by those very people I envy- my professors went to Harvard; they went to Yale.

Facebook is a product of Harvard. I use it. Cardiovascular surgery began at Harvard. The President of the United States graduated from Harvard Law. The list goes on.

It seems as if the greatest gifts from that university (the students who graduate, and contribute to our society) end up becoming all-inclusive: inventing and impacting things that we all use, things that we “need” (even if we don’t really, or didn’t know we did). Essentially, the students are destined to become the very thing the institution isn’t.

So maybe that’s why I want to go there so badly; maybe I want to be someone who can give back, and create something inclusive. Or maybe I just wish I had a few years there under my belt (so that I could get my thirst for Ivy out of my system).

I have a plan to get there…but until I do, I’m going to need more movies.

Tour Guides of Harvard often tell guests that it is “good luck” to rub the left foot of the statue. However, it is common practice for Harvard students to pee on the statue at night.