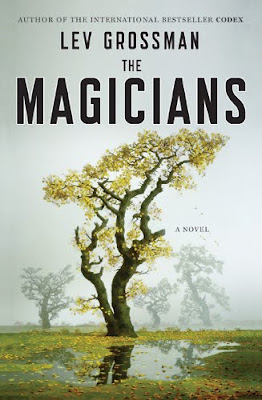 On and off for the past week, I have been reading The Magicians, the sophomore effort (in novel form) by Lev Grossman.

This is an especially interesting write up for me because I’ve heard Grossman talk in person. While most people wouldn’t find this odd, for someone who has been accustomed to writing papers on authors dead for hundreds of years- it’s different. But different is good:
—

The Magicians begins with, and is centered around its main protagonist, Quentin Coldwater. Quentin begins the book as an “average” high school student (that is, if you don’t count his “GPA [being a] … number higher than most people even realize it is possible for a GPA to be” as ‘average’).

Quentin, however, soon discovers (to the tune of temporary happiness, which Grossman explores thoroughly) that he is not merely average, but instead: a Jedi. Err.. a Magician. Immediately, and by immediately, I mean within the first two chapters, Grossman seriously engages with fantasy all-star Harry Potter. The comparisons are there, and they certainly feel intentional, which Grossman acknowledged to my class and me this past December.

In chapter one, Quentin experiences death. In chapter two, Quentin undergoes a series of magical examinations (seemingly at random) before he is allowed admittance to Brakebills (which is a university, and not a high school) that Grossman has explained as “sort of what [he] had always hoped Harvard would be, but that it never really was”. Further, the narrator makes a point to emphasize Quentin’s conscious sexual attraction to female characters, as well as Quentin’s general dissatisfaction with the world around him (contrasted to the wide-eyed [and asexual] wonder that Harry Potter felt).

Clearly, with the world in The Magicians, Grossman is attempting to piece together a narratively functional “real world” fantasy novel. That is, he is superimposing the fantastic into the realm of possibility while still allowing a protagonist who wants more. In fact- Quentin is greedy. Just when you think his life cannot get any more perfect, it does. Over, and over again. (Until it goes to Hell)

Grossman almost takes up a Voltairian attack on fortune- literally smothering Quentin with “the best of all possible worlds”: a mixture of talent, intelligence, friendship, love, and whatever else his heart desires, if for nothing else than to make a simple and over-stated message about the fickle nature of the heart’s content.

While there is no question as to the quality of Grossman’s writing (The Magicians is an easy, enjoyable read- full of rich prose and strong syntax that reads Rowling-esqe) there is a certain question as to what he does and does not successfully accomplish. Like the Rowling stories, the action in Quentin’s world is fast paced and full of obstacles to overcome. Unlike Rowling’s writing, however, Grossman’s world lacked a genuinely addictive ferver (probably because it so closely resembled our own).

I enjoyed The Magicians, but I found another of Grossman’s major plot decisions in The Magicians to be questionable. Grossman has Quentin engage very heavily with his world through the lens of a reader. This sounds brilliant, and at times it is pulled off with perfection: Quentin, an avid fantasy reader, is examining his own reality through the lens of fiction. Indeed, Grossman has been quoted as saying “It was important to me that all of that existed in my world- if for no other reason, than because those things were a part of my world.” and there is a constant struggle throughout the novel to reconcile “real fantasy” with what fantasy should be like. Nevertheless, Grossman’s world is certainly worth commendation, as is the clever way in which he has thought through the magic of his world. Certainly, each of the story’s four main characters (Quentin, Eliot, Alice, and Josh) are given enough attention that by the climax of the novel, there is genuine concern for each character’s safety (on par with our concern for Bella in Breaking Dawn[yes, I went there. Sorry.]); yet, still Grossman’s novel seems to be missing something. I’ll get to this at the end.

Grossman’s adventure (which is best described as a fantasy story within a fantasy story set in a fake “real-world”) speeds through “the school years” in favor of an elusive adulthood- of the world “beyond” the safety and comfort of professors and peers. At times, Quentin’s education seems rushed, as if it exists as a mere formality. Even in his “second” fantasy world, language, animals, and food are all too familiar- as if when Grossman was pressed for fantastic creative dishes of his own, he instead chose “exotic salads”. This would be much more acceptable if half of the book weren’t dedicated to “throw away” moments like these- moments that Quentin himself would later come to resent.

Nevertheless, by choosing to deal with adults in an adult world, Grossman certainly strays far from the Meyer/Rowling camp with the acknowledgement and (gasp!) inclusion of substance abuse, sex, and poor decisions. I am happy to say that all three of these things work tremendously well. Indeed, binge drinking for the sake of binge drinking seems much more authentic and comforting in a fantasy novel than searching for a basilisk in the basement of an enchanted castle.

Not uncommonly, the moments when The Magicians appears darkest are also where it finds its real strength- the train wreck that is the life of Quentin is best observed straight on, and Grossman (reluctantly?) does not pull any punches, even if (as readers) we feel regret while they are being thrown.

The over-emphasis of certain plot points (and the under emphasis of others) led to an unfortunately anti-climatic ending. Throughout the novel, we were expecting so much- and we got it. Grossman gave us twists and double twists, and he gave us a ripe story complete within itself. Yet, still, I felt unhappy. With a neat and brief resolution, The Magicians ends up feeling like an extended exercise in character development rather than a journey with a character who develops.

Ultimately, the strength of The Magicians is that Grossman achieved something truely remarkable- like Quentin admits an array of parlor tricks, he [Grossman] manages to ‘vanish a quarter’- I mean really vanish it. Because at the end of the novel, the reader feels just like Quentin. We are empty- devoid of ourselves and of happiness.

“…he knew he wasn’t happy. Why not? He had painstakingly assembled all the ingredients of happiness. He had performed all the necessary rituals, spoken the words, lit the candles, made the sacrifices. But happiness, like a disobedient spirit, refused to come.”

It’s like that. A feeling of utter confusion- of anger at a wish granted being less than a wish made. Because he manages that, Grossman effectively leaves us wanting more- feeling as transformed as Quentin.
—

And THAT is the ultimate “thing” The Magicians is missing. A student I heard in a history class once summed it up as so: People read to find out what’s at the end of the string- Does Harry defeat Voldemort? What happens with the Bella/Edward/Jacob love triangle? Does Lyra survive? Can Froto get the ring to Mordor? Will Eragon and Saphira manage to beat Gallbatorix and Murtagh?

The point is: each one of those novels has a driving “string” that we follow until the story’s end- for Grossman, that ‘string’ was supposed to be Quentin finding fulfillment in his life. Ultimately, he was successful, primarily because he was so unsuccessful in a convincing immersion of everything else (the fantasy environments, the lack of fulfillment, the dissatisfying reality of life, the reckless substance abuse, etc.)- and that’s OK. Hell, it may well have been intentional that nothing felt quite right. All that matters, though is that we keep reading. And we will.

Lev Grossman’s sequel to The Magician, entitled The Magician King is slated for release in the third quarter of 2011.